David Garrick, the second son and third child of Peter and Arabella Garrick, was born at the Angel Inn, Hereford, on 19 February 1717. David’s grandfather, David de la Garrique, was a Huguenot who fled France in 1685, and David’s father Peter was brought to England in 1687. Our David was for a while one of Samuel Johnson’s pupils at the little school at Edial, near Lichfield. Later, in 1737, Garrick and Johnson made their way to London together, with little money in their pockets, but each destined for fame. Garrick was to serve as a wine salesman for the family business, but he soon pushed that trade out of his mind and turned playwright and actor. He wrote a version of “Lethe” that was played by Henry Giffard’s company at Drury Lane and then joined Giffard at the small theatre in Tankard Street, Ipswich, where his first character may have been Aboan in the tragedy “Oroonoko” in the summer of 1741. At the time Garrick adopted the stage name Lyddall. But then he made his legendary debut as Richard III at the Goodman’s Fields Theatre in East London on 19 October 1741.

He was advertised as ‘a Gentleman (who never appear’d on any Stage)’. He was an overnight sensation. His revolutionary and exciting acting style ‘threw new light on elocution and action,’ banished ranting and bombast, and ‘restored nature, ease, simplicity, and genuine humour.’

On 28 November the anonymity was discarded and his real name appeared in the London bills for the first time for the role of Chamont in “The Orphan”. Two months later, William Pitt proclaimed the 22-year-old Garrick the best actor the English stage had ever produced. From that time on, the name Garrick would be the dominant force in the history of the British theatre in the eighteenth century and his reputation would remain immense to this day.

In the autumn of 1747, with his new partner James Lacy, Garrick took over the management of Drury Lane Theatre, and for 29 years he directed the finest repertory theatre in all Europe. As a pivotal figure in the development of the art of the theatre he instituted new rehearsal techniques and discipline.

The techniques of the theatre arts - scenery, costumes, lighting and other stage practices - significantly matured. Garrick maintained a strong company and demanded their adherence to his instructions and regulations. As modern scholars have pointed out, during the period of Garrick’s triumphs dramatic criticism turned to the analysis of characters, with emphasis on the significance of these characters as he had played them. Though Garrick is credited with restoring much of the original texts of Shakespeare’s plays and rescuing them from the alterations they suffered since the Restoration, he did provide a few corruptions of his own, altering scenes and speeches to suit his needs. His adaptations included a Hamlet without the funeral of Ophelia and the need for the gravediggers, a “King Lear” without the Fool and a Cordelia who lives on, an interpolated dying speech for Macbeth and a scene between the two lovers in the tomb before they die in “Romeo and Juliet”. Garrick, however, was one of the leading playwrights of his day, and many of his plays, especially “The Clandestine Marriage” (with Colman), “Cymon”, “The Lying Valet” and “The Guardian”, became mainstays of the repertoire.

It is a given that Garrick was the greatest actor of his time and one of the greatest of all time. His fame extended throughout Europe. His performances of “King Lear”, “Hamlet”, “Macbeth”, Ranger in “The Suspicious Husband”, Lord Brute in “The Provok’d Wife” and Lusignan in “The Roman Father” became the yardsticks against which all other actors who played these characters were measured. There are over 250 portraits of Garrick, in private and stage character, original and engraved, more than those of any other actor, and exceeded in the “Catalogue of Engraved British Portraits in The British Museum” only by those of Queen Victoria. The Garrick Club holds some 21 of them, along with his life-mask, chair, silver and other memorabilia. Important caches of material and documents about him are in the Garrick Club Library, the British Library, the Folger Shakespeare Library and the Victoria and Albert Museum. When the British Museum was established in the latter half of the eighteenth century, Garrick’s fine collection of old plays formed the nucleus of its library.

In 1749 Garrick married the Viennese dancer Eva Maria Veigel. She outlived him by 43 years. They had no children. During their marriage they enjoyed the company of crowned heads, nobility, and the leading figures of London literary and social circles. They owned residences at No. 27, Southampton Street in Covent Garden, in the Adelphi and on the river at Hampton. The Shakespeare Temple that Garrick had erected at the Hampton villa has recently been restored and opened to the public.

Garrick gave up Drury Lane and made his farewell from the stage in a round of emotional performances in June 1776. He died at his home in the Adelphi on 20 January 1779 and was buried in Poet’s Corner, Westminster Abbey. The splendid funeral procession, one of the greatest ever seen in London, stretched from the Strand to the Abbey. His old schoolmaster Johnson wrote, ‘I am disappointed by that stroke of death which has eclipsed the gaiety of nations, and impoverished the public stock of harmless pleasure.’ 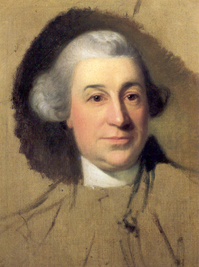 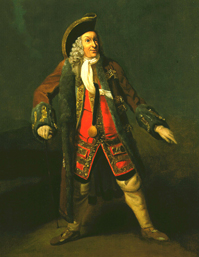 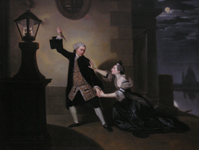